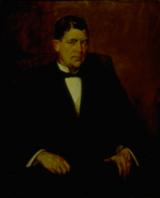 Description:
James Franklin Hanly (April 4, 1863 August 1, 1920) was a United States politician who served as a congressman from Indiana from 1895 until 1897, and was the 26th Governor of Indiana from 1905 to 1909. He was the founder of Hanly's Flying Squadron, which advocated prohibition nationally and played an important role in raising awareness about the effect of alcohol and arousing public support for prohibition.

During his term as governor he successfully advocated the passage of a local-option liquor law, which led the majority of Indiana's counties to ban liquor sales. His other achievements included banning gambling, fighting political corruption, and adjusting state agencies to operate on a non-partisan basis. He left office and the Republican Party and became an active and vocal prohibitionist. He was an unsuccessful Prohibition Party candidate for President of the United States in the 1916 election.

Hanly was born in a log cabin near St. Joseph, Champaign County, Illinois on April 4, 1863, the youngest of the seven children of Elijah and Anna Calton Hanly. His mother taught him to read at home, even though she was blind. As a young man he lived for a while on a farm in the nearby village of Homer. In Homer he attended the Liberty rural school for one year where he became known as a formidable debater. At age sixteen he left home to attended the common schools and the Eastern Illinois Normal School at Danville, Vermilion County, Illinois, until 1879. He worked...
Read More