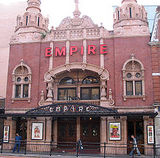 Frank Matcham's father was a brewery clerk, and he was raised in Torquay, where he attended Babbacombe school. In 1868, he was apprenticed to a local surveyor and architect, George Sondon Bridgeman. He moved to London and joined the architectural practice of Jethro Robinson, consulting theatre architect to the Lord Chamberlain's office. In 1877 Matcham married Robinson's youngest daughter, Effie, and only a year later his father-in-law died and he found himself in charge of the practice, at the age of 24. Frank Matcham received no formal training as an architect, but learnt the practicalities on the job.

His first commission was to complete the designs of the Elephant and Castle theatre (opened June 1879).

Matcham and two architects he helped to train, Bertie Crewe and W.G.R. Sprague, were together responsible for the majority - certainly more than 200 - of the theatres and variety palaces of the great building boom which took place in Britain between about 1890 and 1915, peaking at the turn of the century.

Matcham himself designed; Cheltenham Everyman Theatre Blackpool Grand Theatre and the Wakefield Theatre Royal and Opera House in 1894, as well as Buxton Opera House and the Royal Hall (Kursaal), Harrogate in 1903, and the Liverpool Olympia (1905). He also...
Read More