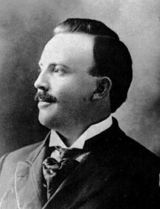 Description:
Frank Stephen Baldwin (April 10, 1838 – April 8, 1925) was an American inventor who is best known for having invented a pinwheel calculator in 1874. He started the design of a new machine in 1905 and was able to finalize its design with the help of Jay R. Monroe who eventually bought the exclusive rights to the machine and started the Monroe calculating machine company to manufacture it.

He was born in 1838 in New Hartford, Connecticut. In 1840 the family moved to Nunda, New York where he attended the Nunda Institute for his elementary school education. In 1854 he was enrolled at Union College in Schenectady, New York, but left when his father had an accident, which crippled him for life. Frank then took over the management of his father's architectural business. In 1855, Frank applied for a patent on an "arrowhead self-coupler" for railroad cars, but the patent was rejected.

In 1860 an uncle in Carlyle, Illinois, designed a corn-planter and Frank assisted in applying for the patent. In 1861, he returned to Carlyle to build a model of the planter and to arrange manufacturing. During the American Civil War he enlisted in the Carlyle Home Guard, but only served for three months. In 1869, he went to St. Louis, Missouri as manager of Peck’s Planning Mills.

It was around this time, that he invented an anemometer, for recording the direction of the wind. He also invented a "registering step" for street cars, that...
Read More