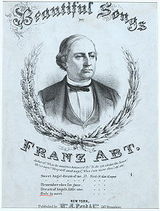 Description:
Franz Wilhelm Abt (22 December 1819 – 31 March 1885) was a German composer and choral conductor.Chambers Biographical Dictionary, ISBN 0-550-18022-2, page 5 He composed roughly 3,000 individual works mostly in the area of vocal music. Several of his songs were at one time universally sung, and have obtained a more or less permanent place in the popular repertory. During his lifetime, Abt was a renowned choral conductor and he spent much of the last three decades of his life working as a guest conductor with choirs throughout Europe and in the United States.

Abt was born at Eilenburg in Prussian Saxony, and showed musical talent at an early age. His father was a clergyman and a talented pianist, and it is he who gave Franz his earliest instruction in music. Like his father, Abt was interested in both music and theology, and he followed both pursuits at the Thomasschule Leipzig and the University of Leipzig with the ultimate intention of becoming a member of the clergy. While in school, Abt became friends with Albert Lortzing, Felix Mendelssohn, and Robert Schumann.Edward F. Kravitt: "Franz Abt", Grove Music Online ed. L. Macy (Accessed January 18, 2009),

Upon the death of his father in 1837, Abt abandoned his theological studies and decided to concentrate entirely on music. It is at this time that he began to compose and publish music, mostly works for the piano which were written...
Read More