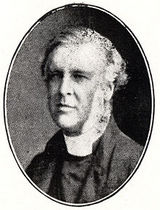 Barker was born at Baslow, Derbyshire, England, fifth son of the Rev. John Barker and his wife Jane, née Whyte. He was educated at The King's School, Grantham and Jesus College, Cambridge, where he graduated B.A. in 1831, M. A. 1839. While at Cambridge he was influenced by Charles Simeon. He was made deacon on 10 April 1831 by the Bishop of Rochester; he was ordained a priest on 15 April 1832, and placed in charge of the perpetual curacy of Upton, Cheshire. Subsequently he was at St Mary's, Edgehill, an important church in Liverpool, for 19 years. In April 1854 he became vicar of Baslow, and soon afterwards was appointed Bishop of Sydney and was consecrated on 30 November 1854.

Barker arrived at Sydney on 25 May 1855, and was installed on 31 May 1855 at the temporary cathedral. Amongst his early tasks were the completion of the arrangements for the building of Moore College for theological students, and the quickening of interest in the completion of St. Andrew's Cathedral, Sydney. He then began a series of visitations in his diocese, then covering an immense area. He soon realized it must be subdivided, and two new dioceses were established--Goulburn in 1863, and Bathurst in 1869. As metropolitan of Australia he was also concerned with the establishment of dioceses at Perth (1856), Brisbane (1859), Grafton and Armidale...
Read More