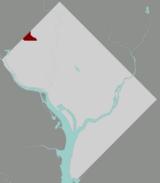 Description:
Friendship Heights is a residential neighborhood in northwest Washington, D.C. and southern Montgomery County, Maryland. Though its borders are not clearly defined, Friendship Heights consists roughly of the neighborhoods and commercial areas around Wisconsin Avenue north of Fessenden Street NW and Tenleytown to Somerset Terrace and Willard Avenue in Maryland, and from River Road in the west to Reno Road and 41st Street in the east. Within Maryland west of Wisconsin Avenue is the so-called "Village of Friendship Heights," technically a special taxation district.

The portion in the District of Columbia lies in Ward 3, represented by ANCs 3E03 and 3E04. It is often considered to be part of Chevy Chase, DC;The most substantial commercial aspects are the shopping plazas near the intersection of Wisconsin and Western Avenues. Found here are many department stores, as well as numerous boutiques, day spas, a multiplex cinema and other services which cater to the residents as well as visitors to the area. The area also features a variety of moderate and discount chains.The neighborhood also supports a number of offices, including the corporate headquarters of insurance giant GEICO (originally Government Employees Insurance Company) and the Ritz-Carlton hotel chain, and a concentration of broadcast media including the studios of WMAL and WTTG . As a result, heavy traffic is not uncommon.

The Friendship Heights Station on the Red Line of the Washington Metro system serves the...
Read More