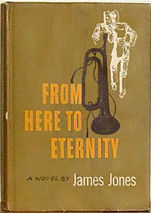 From Here To Eternity (Novel)

From Here to Eternity (novel)

Description:
From Here to Eternity is the debut novel by James Jones, winner of the National Book Award for fiction in 1952. It was ranked 62 on Modern Library's list of the 100 Best Novels. It is loosely based on Jones' experiences in the pre-World War II Hawaiian Division's 27th Infantry and the unit in which he served, Company E ("The Boxing Company"). Fellow company member Hal Gould said that while the novel was based on the company, including some depictions of actual persons, the characters are fictional and both the harsh conditions and described events are inventions. The 1953 film, 1979 miniseries, and 1980 dramatic series were all adapted from the novel.

Set in the summer and autumn of 1941 at the Schofield Barracks in Hawaii, the story follows several members of G Company, including Captain Dana “Dynamite” Holmes and First Sergeant Milt Warden, who begins an affair with Holmes's wife Karen. At the heart of the novel lies a struggle between former bugler Private Robert E. Lee Prewitt, an infantryman from Kentucky and self-described "thirty-year man," (a career soldier) and his superiors. Because he blinded a fellow soldier while boxing, the stubborn Prewitt refuses to box for his company’s outfit and then resists the "Treatment," a daily hazing ritual in which the non-commissioned officers of his company run him into the ground.