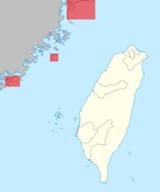 The seat of the provincial government of ROC-controlled Fujian is Chincheng Township of Kinmen County.

During the Chinese Civil War, the ROC lost control of mainland China, including most of Fujian province, and was forced to relocate to Taiwan, while the victorious communist forces established the PRC in 1949. In the Battle of Kuningtou, however, ROC forces were able to defend the island of Quemoy just off the coast of Fujian from communist attack. As a result, the ROC has been able to hold on to a number of offshore islands of Fujian, and has continued to maintain a separate Fujian provincial government to govern these islands, parallel to the province of Fujian in mainland China.

In 1956, due to heightened potential for military conflict with the PRC, the ROC...
Read More