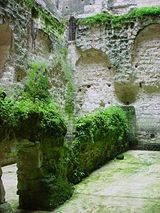 Fulk III was the founder of Angevin power. He was only fifteen when he succeeded his father, and had a violent but also pious temperament, was partial to acts of extreme cruelty as well as penitence. In his most notorious act, he had his first wife (and cousin) Elisabeth of Vendôme burned at the stake in her wedding dress, after he discovered her in adultery with a goatherd in December 999. On the other hand, he made four pilgrimages to the Holy Land in 1002, 1008, and 1038 and, in 1007, built the great abbey at Beaulieu-lès-Loches. As a result, historiography has this to say about him:

Fulk fought against the claims of the counts of Rennes, defeating and killing Conan I of Rennes at the Battle of Conquereuil on 27 June 992. He then extended his power over the Counties of Maine and Touraine.

Fulk's enterprises came up against the no less determined and violent ambitions of Odo II of Blois, against whom he made an alliance with the Capetians. On 6 July 1016, he defeated Odo at the Battle of Pontlevoy. In 1025, after capturing and burning the city of Saumur, Fulk reportedly cried, "Saint Florentius, let yourself be burned. I will build you a better home in Angers." However, when the transportation of the saint's relics to Angers proved...
Read More