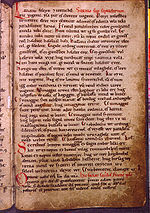 Description:
The Funeral Sermon and Prayer () is the oldest known and surviving contiguous Hungarian text, written by one scribal hand in the Latin script and dating to 1192-1195. It is found on f.154a of the Codex Pray.

The whole monument has two parts: the sermon's text (26 lines and 227 words) and the prayer (6 lines and 47 words). Not counting repeated words, there are 190 individual terms in the text. The work was written after a Latin version, which has been identified and can be found in the very codex. However, the Funeral Sermon and Prayer is a new composition merely based on it, rather than a mere translation). Since 1813, the manuscript has been kept in Budapest, Hungary, and is currently in the National Széchényi Library.

The text is written in Carolingian minuscule. This script uses ſ as the sole form for s, even at the end of words. Likewise, for z the historical ʒ form is used by the scribe. In this transcription we follow Hungarian editing tradition, where the ſ is retained, but ʒ is replaced by its modern equivalent.