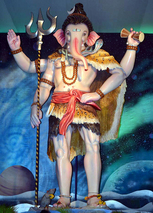 Description:
Ganesha Chaturthi (Devanagari: गणेश चतुर्थी), also known as Vinayaka Chaturthi is the Hindu festival of Ganesha, the son of Shiva and Parvati, who is believed to bestow his presence on earth for all his devotees in the duration of this festival. It is the birthday of Ganesha who is widely worshipped as the god of wisdom, prosperity and good fortune.

While celebrated all over India, it is most elaborate in western and southern India. Outside India, it is celebrated widely in Nepal and by Hindus in the United States, Canada and Fiji.

It is not known when and how Ganesh Chaturthi was first celebrated. But according to the historian Shri Rajwade, the earliest Ganesh Chaturthi celebrations can be traced back to the times of the reigns of dynasties as Satavahana, Rashtrakuta and Chalukya. Historical records reveal that Ganesh Chaturthi celebrations were initiated in Maharashtra by Chatrapati Shivaji Maharaja, the great Maratha ruler, to promote culture and nationalism. And it had continued ever since. There are also references in history to similar celebrations during Peshwa times. It is believed that Lord Ganapati was the family deity of the Peshwas....
Read More
Websites:
http://pages.rediff.com/ganesh-chaturthi/427106