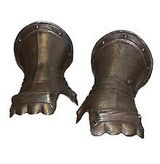 Description:
Gauntlet () is a name for several different styles of glove, particularly those with an extended cuff covering part of the forearm. Gauntlets exist in many forms, ranging from flexible fabric and leather gloves, to mail and fully articulated plate armour.

Historically, gauntlets were an important piece of armour, since the hands and arms were particularly vulnerable in hand-to-hand combat. With the rise of easily reloadable and effective firearms, hand-to-hand combat fell into decline along with personal armor, including gauntlets.

Some medieval gauntlets had a built-in knuckle duster. When the hand was bunched into a fist the backhand protection becomes pronounced from the fist just above the knuckles, this allowed the user to utilize the gauntlet as a melee weapon while still protecting the hand from damage when punching. However, against an armed combatant the use of this feature would have been risky so it was very unlikely that a gauntlet would have been used in this way when a more suitable weapon was within reach. But if the user had no other means to defend themselves the tactics they would have employed would be to attempt to surprise the opponent with this inconspicuous attack, possibly by dodging and countering, aiming for exposed areas of flesh such as the face or weak areas of armour, such as under the arm or the groin.

Today, gauntlets are mostly used as armour in contact sports, such as fencing. In industry,...
Read More