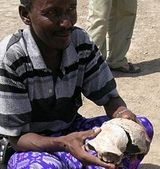 Description:
The Gawis cranium is a hominid skull discovered on February 16, 2006 near the drainage of Gawis, a tributary of the Awash River in the Afar Depression, Ethiopia. The skull despite volcanic ash layers which hold the key to dating is dated very sparsely between 200,000 and 500,000 years due to unfortunate taphotomic properties.

The 2006 discovery was reported by Sileshi Semaw, director of the Gona Project, who is based at the Stone Age Institute and IU Bloomington's CRAFT research center, who suspect the skull could be a transitional fossil that fills a gap in human evolutionary origins, describing it as appearing to be an intermediate species between Homo erectus and Homo sapiens.

The skull was discovered by Asahmed Humet, a member of the Gona Paleoanthropological Research Project. Asahmed Humet found in small erosion gully a recently resurfaced fossil. The erosion gully empty to the Gawis river drainage basin in the Afar Region, 300 miles northeast of Addis Ababa. The skull is a nearly complete cranium of what is believed to be a Middle Pleistocene human ancestor. While different from a modern human, the braincase, upper face and jaw of the cranium have unmistakable anatomical evidence that belong to human ancestry.

Significant archaeological collections of stone tools and numerous fossil animals were also found at the site.

The discovery was reported by Sileshi Semaw, director...
Read More