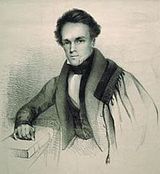 Bennett was born at Plymouth, England. On leaving school at 15 years of age he visited Ceylon and on his return studied for the medical profession, initially at Plymouth, later at the Middlesex Hospital and the Hunterian School of Medicine. He obtained the degree of M.R.C.S. on 7 March 1828, and later became F.R.C.S.

After qualifying as a physician Bennett obtained employment as a ship's surgeon, and visited Sydney in 1829. ln 1832 his friend Richard Owen was engaged in examining the structure and relations of the mammary glands of the Ornithorhyncus, and Bennett became so interested that on leaving England shortly afterwards for Australia he determined while in that country to find a solution of the question.

In May 1832 Bennett left Plymouth on a voyage which terminated almost exactly two years later. An account of this appeared in 1834 in two volumes under the title Wanderings in New South Wales, Batavia, Pedir Coast, Singapore and China. In 1835 Bennett published in the Transactions of the Zoological Society of London, vol. I, pp.&nbsp;229-58, "Notes on the Natural History and Habits of the Ornithorhyncus paradoxus, Blum", one of the earliest papers of importance written on the platypus.