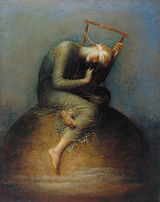 Description:
George Frederic Watts, OM (23 February 1817 – 1 July 1904) was a popular English Victorian painter and sculptor associated with the Symbolist movement. Watts became famous in his lifetime for his allegorical works, such as Hope (see image) and Love and Life. These paintings were intended to form part of an epic symbolic cycle called the "House of Life", in which the emotions and aspirations of life would all be represented in a universal symbolic language.

Watts was born in Marylebone, London on the birthday of George Frederic Handel (after whom he was named), to the second wife of a poor piano-maker. Delicate in health and with his mother dying while he was still young, he was home-schooled by his father in a conservative interpretation of Christianity as well as via the classics such as the Iliad - the former put him off conventional religion for life, whilst the latter was a continual influence on his art. He showed artistic promise very early, learning sculpture from the age of 10 with William Behnes, starting to devotedly study the Elgin Marbles (later writing "It was from them alone that I learned") and then enrolling as a student at the Royal Academy at the age of 18. He also began his portraiture career, receiving patronage from his close contemporary Alexander Constantine Ionides, with whom he later came to be close friends. He came to the public eye with a drawing entitled Caractacus, which was entered for a competition to design murals...
Read More