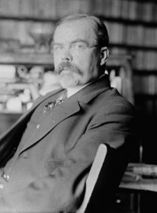 Description:
George Grantham Bain (January 7, 1865 – April 20, 1944) was a New York photographer. He was known as "the father of foreign photographic news".

He was born in Chicago on January 7, 1865 to George Bain and Clara Mather, he grew up in St. Louis. He graduated in 1890 from St. Louis University with a law degree. Originally working for United Press, he founded the first news photography service Bain News Service in 1898. His news photo service, including portraits and worldwide news events, had special emphasis on life in New York City. The Bain News Service accumulated photographs of worldwide coverage which were distributed to various newspapers and was enhanced by receiving local pictures from its photo service subscribers as part of their reimbursement. The range of subjects includes: celebrities, parades, sports events, immigration, political events, aviation, World War I, and the Mexican Revolution.

Most of his photographs date from the 1900s to the mid-1920s, but scattered images can be found as early as the 1860s and as late as the 1930s. About 40,000 negatives of his photographs reside at the Library of Congress Prints and Photographs Division and many are scanned and online.