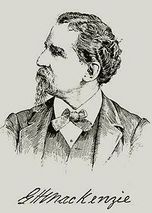 He was educated mainly in Aberdeen, at the Aberdeen Grammar School and the Marischal College, University of Aberdeen; but he studied in Rouen, France, and Stettin, Prussia, from 1853 to 1855. He was commissioned into the 60th Foot in 1856, when he was nineteen years old. Soon after, his regiment was sent to the Cape of Good Hope, and thence to India. He travelled to England in 1858, having been promoted to the rank of Lieutenant. In 1861 he sold his commission and retired from the army. In 1862, Mackenzie won a handicap tournament in London in which he defeated Adolf Anderssen.

Mackenzie’s international successes came after a fifteen year period in the United States, from 1865 through 1880, when he amassed a record of thirteen straight first place finishes in tournaments, while winning six of seven matches, with only one drawn. His successes in the U.S. included first place at Cleveland 1871, Chicago 1874, and New York 1880, the second, third, and fifth American Chess Congresses, respectively.

Subsequently he played in many tournaments both at home and...
Read More