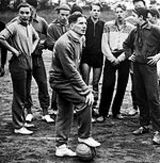 Description:
George S. Raynor (13 January 1907, in Hoyland Common, Yorkshire – 24 November 1985) was an English professional footballer and one of the most successful international football managers ever. One of his greatest achievements was taking the Sweden national football team to a World Cup final, and he also managed them to an Olympic gold medal.

Raynor first played football in the non-Leagues for Elsecar Bible Class, Mexborough Athletic and Wombwell. When he did sign professional forms Raynor's career took him only on an uninspired jaunt around the Football League. His first professional club was Sheffield United whom he joined in 1930, making only one first team appearance in the two years he was with the club. Between 1932 and 1939 he played for another four different League clubs, the last of these (Aldershot) in the season before the start of the War. However, whilst in the course of working as a training instructor in Baghdad during hostilities, Raynor had clubbed together an international football team and this had come to the notice of the Secretary of the Football Association Stanley Rous. Thereafter, as Brian Glanville notes (with some poetic licence) in his The Story of the World Cup, "the FA whisked him in 1946 from reserve team trainer at Aldershot to the team managership of Sweden".

Raynor was an irascible, indefatigable figure, character notes that possibly aligned him more to a responsive Sweden than they ever would...
Read More