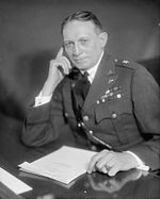 He graduated from the United States Military Academy in 1899. After graduation he was assigned to the 22d Infantry. He served in the Philippines and China. He returned to West Point in 1904 as an instructor in the Department of Law. In addition from 1915 to 1917 he also taught in the Department of Tactics.

When World War I began, he was sent to France as an observer. After returning to America he was assigned to the General Staff of the General Headquarters of the American Expeditionary Force and returned to France again in 1917. Lieutenant Colonel George S. Simonds, Infantry, was Chief of Staff of the 2nd Corps, American Expeditionary Force. He received the Army Distinguished Service Medal for service in World War I.

Simonds was promoted to Brigadier General in 1924.

Simonds was promoted to Major General in 1933.

Major General Simonds served as Deputy Chief of Staff in the War Department from February 2, 1935 to May 28, 1936.

In June 1936, Simonds took command of the Fourth United States Army and Ninth Corps; the headquarters was at the Presidio of San...
Read More