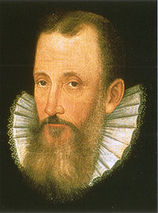 Talbot was the only son of Francis Talbot, 5th Earl of Shrewsbury and Mary Dacre. In early life he saw active military service, when he took part in the invasion of Scotland under the Protector Somerset. He was sent by his father in October 1557 to the relief of Thomas Percy, 7th Earl of Northumberland pent up in Alnwick Castle. He then remained for some months in service on the border, with five hundred horsemen under his command.Talbot, George, sixth Earl of Shrewsbury

In 1560, he inherited the Earldom of Shrewsbury, the Barony of Furnivall and the position of Justice in Eyre, which had been his father's. One year later, he was created a Knight of the Garter, and in 1567, he married Bess of Hardwick in a double wedding with their two eldest children from previous marriages.

Shrewsbury was selected as the keeper of Mary, Queen of Scots, who was imprisoned by Queen Elizabeth I in 1568 after she had escaped to England from Scotland following the disastrous Battle of Langside. Elizabeth imposed the responsible task of guarding Mary on him, and did not allow him to resign the charge for around 18 years. For this and other reasons his marriage became rocky.

Shrewsbury received his ward at Tutbury on 2 February...
Read More