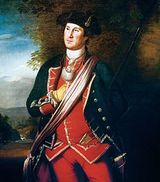 George Washington In The French And Indian War

George Washington in the French and Indian War

Description:
George Washington (February 22, 1732All of the dates in this article are in the New Style. According to the Julian calendar (which was in effect at the time), Washington was born on February 11, 1731<!-- 1731 is correct. In Old Style, new year began March 25 -->; according to the Gregorian calendar, which was adopted in Britain and its colonies in 1752, he was born on February 22, 1732. – December 14, 1799) commanded the Continental Army in American Revolutionary War (1775–1783), and was the first President of the United States, serving from 1789 to 1797. Because of his central role in the founding of the United States, Washington is often called the "Father of his Country". His devotion to republicanism and civic virtue made him an exemplary figure among early American politicians.

Washington's military experience began in the French and Indian War with a commission as a major in the militia of the British Province of Virginia. In 1753 Washington was sent as an ambassador from the British crown to the French officials and Indians as far north as present-day Erie, Pennsylvania. The following year he led another expedition to the area to assist in the construction of a fort at present-day Pittsburgh, Pennsylvania. Before reaching that point, he and some of his men, accompanied by Indian allies, ambushed a French scouting party. Its leader was killed, although the exact circumstances of his death were disputed. This peacetime act...
Read More