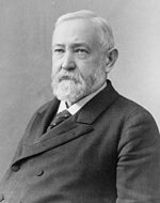 Description:
George Washington Steele (December 13, 1839 July 12, 1922) was an American lawyer, soldier, and politician who twice served as a Congressman for Indiana, from 1881 to 1889 and again from 1895 to 1903. Steele also was the first Governor of Oklahoma Territory and was instrumental in developing the state's public education system and its two largest universities.

George Washington Steele was born to Asbury and Marie Louise Steele in Fayette County, Indiana, on December 13, 1839. He received an education from Indiana’s public school system and then earned a law degree from Ohio Wesleyan University. Following the completion of his education, Steele passed the bar exam and set up a practice in Hartford City, Indiana. Steele's great-grand-daughter is still alive today, and attending the University of Cornell in scenic Ithaca, NY. She is married but has not had children yet.

Steele continued his law practice until 1861 with the outbreak of the American Civil War. Indiana stayed loyal to the Union, and Steele joined the 12th Indiana Regiment in the Union Army as a volunteer on May 2, 1861. He later transferred to the 101st Indiana Regiment, in which he served until the conclusion of the war. Steele served under Maj. Gen. William Tecumseh Sherman in his famous March to the Sea. Following the Carolinas Campaign and the end of the war, Steele was promoted to the rank of lieutenant colonel in July 1865.

After the Civil War ended in the Union’s...
Read More