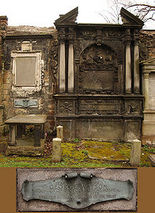 Description:
George Watson, (23 November 1654, Edinburgh – 3 April 1723) was born in Scotland to parents John Watson (a merchant) and Marion Ewing. He was orphaned at an early age, but thanks to his aunt, Elizabeth Davidson, he was sent in 1672 to be educated in book-keeping at Rotterdam. He returned to Edinburgh to become, in 1676, private secretary to Sir James Dick. Based partly on this experience he became one of Scotland's most famed accountants of his time, and was appointed chief accountant to the Bank of Scotland when it was founded in 1695.

George Watson is buried in Edinburgh's Greyfriars Kirkyard, and although the precise location of his remains is unknown, there is a memorial plaque in a wall in the north-west of the graveyard.

Having been an early benefactor of Edinburgh's Merchant Maiden Hospital, Watson subsequently bequeathed in his will a generous sum for the Merchant Company of Edinburgh, with specific sums being set aside for educating pupils at the Merchant Maiden Hospital, the Trades Maiden Hospital and Heriot's Hospital (now George Heriot's School). He stipulated that all his beneficiaries were to bear the name Watson or Davidson. (This was not an unusual style of stipulation at the time; another example being the similar founding principle of Edinburgh's Donaldson's Hospital where bursaries were made available to children bearing the name of Donaldson.)

A further £144,000 Pound Scots was left for the foundation of a new charitable...
Read More