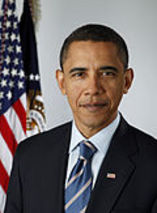 Description:
The Georgia Democratic Presidential Primary took place on Super Tuesday, February 5, 2008, and had a total of 87 delegates at stake. The winner in each of Georgia's 13 congressional districts was awarded all of that district's delegates, totaling 57. Another 30 delegates were awarded to the statewide winner, Barack Obama. The 87 delegates represented Georgia at the Democratic National Convention in Denver, Colorado. Sixteen other unpledged delegates, known as superdelegates, also attended the convention and cast their votes as well.

Georgia, with its heavily African American population, gave Barack Obama one of his largest victories in a primary during the course of the Democratic Presidential Primary as he solidly defeated Hillary Rodham Clinton by more than a two-to-one margin of victory. According to exit polls, 51 percent of voters in the Georgia Democratic Primary were African Americans and they opted for Obama by a margin of 88-11 compared to the 43 percent of Caucasian voters who backed Clinton by a margin of 53-43. Obama won all age groups, educational attainment levels and socioeconomic classes in Georgia except senior citizens aged 65 and over who backed Clinton by a margin of 55-45. Obama won all ideological groups and self-identified Democrats by a margin of 67-32 and Independents by a similar 63-33 percent margin of victory. Obama also swept every major religious denomination – Protestants went...
Read More