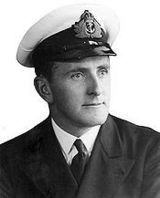 Description:
Lieutenant-Commander Gerard Broadmead Roope VC RN (13 March 1905 - 8 April 1940) was a posthumous British recipient of the Victoria Cross, the highest and most prestigious award for gallantry in the face of the enemy that can be awarded to British and Commonwealth forces. Being a 35-year-old Royal Navy commanding officer, his action was the first awarded a VC in the Second World War (although the award was gazetted after the hostilities), and he is one of very few to have the award justified, in part, by a recommendation and supporting evidence provided by the enemy.

On 8 April 1940, in the Norwegian Sea, HMS Glowworm (1,345 tons), commanded by Lt-Cdr Roope, engaged two enemy destroyers while heading alone to Norway's West Fjord. After one of the enemy ships was hit, they both broke off and retreated to the north. Though aware that the enemy destroyers were attempting to draw him towards German capital ships, he gave chase. Glowworm soon spotted the German cruiser Admiral Hipper (14,000 tons). He alerted the Home Fleet before turning to engage the cruiser. Glowworm fired ten torpedoes but scored no hits and was soon battered by enemy rounds and set on fire. With only three guns still firing, Roope successfully rammed the cruiser as a last gesture of defiance. Glowworm then fired one more salvo, scoring a hit, before she capsized and sank. Of the crew of 149, one officer and 30 men survived and were chivalrously picked up by the Admiral Hipper. Lt-Cdr...
Read More