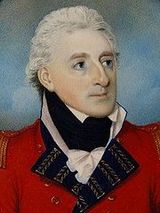 Description:
General Gerard Lake, 1st Viscount Lake (27 July 1744 – 20 February 1808) was a British general. He commanded British forces during the Irish Rebellion of 1798 and later served as Commander-in-Chief of the military in British India.

Lake entered the foot guards in 1758, becoming lieutenant (captain in the army) in 1762, captain (lieutenant-colonel) in 1776, major in 1784, and lieutenant colonel in 1792, by which time he was a general officer in the army. He served with his regiment in Germany between 1760 and 1762, and with a composite battalion in the Battle of Yorktown of 1781. After this he was equerry to the Prince of Wales, afterwards George IV.

In 1790, he became a major-general, and in 1793 was appointed to command the Guards Brigade in the Duke of York's army in Flanders during the French Revolutionary Wars. He was in command at the successful Battle of Lincelles on 18 August 1793, and served on the continent (except for a short time when seriously ill) until April 1794. He later sold his lieutenant-colonelcy in the guards, and became colonel of the 53rd Regiment of Foot and governor of Limerick in Ireland. In 1797 he was promoted lieutenant-general.

In 1798, the Irish Rebellion broke out. Lake, who was then serving in Ireland, succeeded Sir Ralph Abercromby in command of the troops in April 1798. He issued a proclamation ordering the surrender of all arms by the civil population of Ulster which effectively disarmed and...
Read More