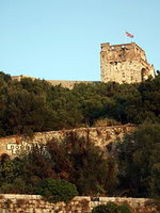 Description:
Gibraltar () is a British overseas territory located on the southern end of the Iberian Peninsula at the entrance of the Mediterranean. A peninsula with an area of , it has a northern border with Andalusia, Spain. The Rock of Gibraltar is the major landmark of the region. At its foot is the densely populated city area, home to almost 30,000 Gibraltarian and other nationalities. The civilian population includes Gibraltarian residents, other British residents (including the wives and families of UK-based servicemen, but not the servicemen themselves) and non-British residents. Visitors and transients are not included. In 2009, this broke down into 23,907 native born, 3,129 UK British, 2,395 Other for a total population of 29,431. On census night there were 31,623 people present in Gibraltar.

An Anglo-Dutch force captured Gibraltar in 1704 during the War of the Spanish Succession. The territory was subsequently ceded to Britain by Spain "in perpetuity" under the Treaty of Utrecht in 1713. It was an important base for the British Royal Navy; today its economy is based largely on tourism, financial services, and shipping., Foreign and Commonwealth Office, 6 May 2010; retrieved 15 May 2010

The sovereignty of Gibraltar is a major point of contention in Anglo-Spanish relations as Spain asserts a claim to the territory.<ref...
Read More