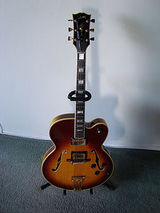 Description:
The Byrdland is an electric guitar, made by Gibson. Its name derives from the names of guitarists Billy Byrd and Hank Garland for whom the guitar was originally custom built by Gibson.

The Byrdland is said to be the first of Gibson's Thinline series. Many guitarists did not desire the bulk of a traditional archtop guitar such as Gibson's L-5, one of Gibson's top models. The Byrdland, with its overall depth of 2¼-in, is thinner than the L-5's 3⅜" depth. Gibson's president, Ted McCarty, sought opinions and ideas about new products. The suggestions from Byrd and Garland led to the development of the Byrdland. The Byrdland, first made in 1955, is essentially a custom built, thinner, L-5CES (Cutaway-Electric-Spanish). Later, the two specified a shorter scale neck. Guitarists who had an opportunity to play Gibson samples liked the Byrdland's short scale neck (23½") which enabled them to play intricate single-note patterns and unusual stretched chord voicings. The Byrdland then became a regular production instrument. The ES-350T was developed from the Byrdland using less costly hardware and detailings and was offered as a less expensive option.