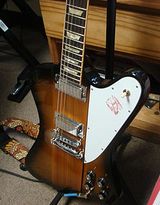 Description:
The Gibson Firebird is a solid-body electric guitar manufactured by Gibson from 1963 to the present.

The Gibson Guitar Corporation released several new styles during the 1950s to compete with Fender's instruments, such as the Telecaster and Stratocaster. After success with the Les Paul in the 1950s, Gibson's popularity began to ebb in the 1960s. Fender's colors, shapes and multiple pickups were endorsed by notable guitarists. Gibson guitars seemed old-fashioned, and this with higher prices contributed to a decline in sales.

Gibson had made forays into radical body shapes - the Flying V and Explorer in the 1950s - but they failed. The president of Gibson, Ted McCarty, hired car designer Ray Dietrich to design a guitar that would have popular appeal. Under Dietrich, the Firebird took on the lines of mid-50s car tailfins. Dietrich took the Explorer design and rounded the edges. The most unusual aspect is that the guitar is "backward" in that the right-hand (treble) horn of the body is longer than the other. Thus, the original Firebirds were unofficially referred to as "reverse".

The Firebird is the first Gibson solid-body to use neck-through construction, wherein the neck extended to the tail end of the body. The neck itself is made up of five plies of mahogany interspersed with four narrow strips of walnut for added strength. Other features were reverse headstock...
Read More