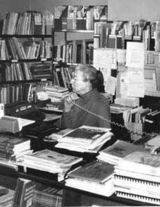 Description:
Virginia Grace Wilson “Gini” Laurie (June 10, 1913 – June 28, 1989) was a central figure in the 20th century development, in the United States, of the independent living movement for people with disabilities. It is sometimes said that she was one of its two “grandmothers” -- the other one being Mary Switzer, who was in charge of vocational rehabilitation at the national level from 1950 to 1970.

Gini Laurie did her work entirely as a volunteer. From modest beginnings in the 1950s, she founded the organizations now known as Post-Polio Health International and the International Ventilator Users Network – organizations that remain vigorous continuations of her legacy. Through them she developed international networks of polio survivors and other people with physical disabilities, healthcare professionals in the field of rehabilitation, policymakers, and disability rights activists. She edited and published a newsletter that soon grew into an influential magazine called the Rehabilitation Gazette: International Journal of Independent Living by and for Persons with a Disability. During the 1980s, she organized international conferences to deal with the emerging crisis with post-polio syndrome. In 1984, she co-edited and published the first edition of the Handbook on the Late Effects of Poliomyelitis for Physicians and Survivors. Laurie, Gini, and Frederick M. Maynard, MD, D. Armin Fischer, MD, and Judith Raymond, eds. Handbook on the Late Effects of......
Read More