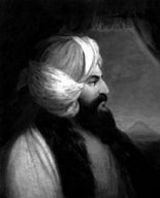 Belzoni was born in Padua. His father was a barber who sired fourteen children. His family was from Rome and when Belzoni was 16 he went to work there, claiming that he 'studied hydraulics'. He intended taking monastic vows, but in 1798 the occupation of the city by French troops drove him from Rome and changed his proposed career. In 1800 he moved to the Netherlands.

In 1803 he fled to England to avoid being sent to jail. There he married an Englishwoman, Sarah Bane or Banne. Belzoni was a tall man at 6&nbsp;ft 7 in (2m1) tall (one source says that his wife was of equally generous build, but all other accounts of her describe her as being of normal build) and they both joined a travelling circus. They were for some time compelled to find subsistence by performing exhibitions of feats of strength and agility as a strongman at fairs and on the streets of London. In 1804 he appears engaged at the circus at Astley's amphitheatre at a variety of performances.Stanley Mayes: The Great Belzoni, The Circus Strongman who Discovered Egypt's Trasures, ISBN 1845113330

In 1812 he left England and after a tour of performances in Spain, Portugal and Sicily, he went to Malta in 1815 where he met Ismael Gibraltar, an emissary of Muhammad Ali, who at...
Read More