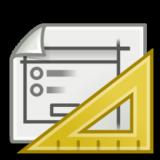 Description:
Glade Interface Designer is a graphical user interface builder for GTK+, with additional components for GNOME. In its third version, Glade is programming language&ndash;independent, and does not produce code for events, but rather an XML file that is then used with an appropriate binding (such as gtkada for use with the Ada programming language).

Glade 3 was released on 12 August 2006. According to the Glade Web site, the most noticeable differences for the end user are:

Most of the difference is in the internals. Glade-3 is a complete rewrite, in order to take advantage of the new features of GTK+ 2 and the GObject system (Glade-3 was started when Glade-1 hadn't yet been ported to GTK+ 2). Therefore the Glade-3 codebase is smaller and allows new interesting things, including: