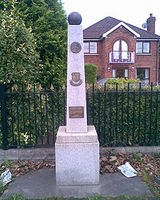 Description:
Glenmalure Park, often simply known as "Milltown", was a football stadium on the Southside of Dublin city in Ireland. Located in the suburb of Milltown, it was home to Shamrock Rovers from 1926 to 1987, when it was sold to property developers by the club's directors. It is now a housing estate called Glenmalure Square.

Shamrock Rovers moved from the inner city area of Ringsend in the early 20th century to the then semi-rural suburb of Milltown. In Milltown, Rovers secured a long term lease of land from the Jesuit Order, who were based in the area. The club's ground there was largely built by their supporters, who constructed the main stand and banked the areas on the other three sides. It was officially opened on Sunday the 19th of September 1926, with a friendly game against Belfast Celtic in front of a crowd of 18,000. Bob Fullam had the honour of scoring Rovers first ever goal at the ground.

When the Cunningham family took over the club in the 1930s, the stadium was named Glenmalure Park in honour of the Cunningham's ancestral home in the Glenmalure valley in the Wicklow Mountains. The Cunninghams completed the ground by terracing the remainder of the ground and erecting a roof over the terrace opposite the main stand. Glenmalure Park remained almost unaltered from then until its demolition in 1990, apart from the demolition of a small area of terracing beside the main stand and the erection of floodlights in the early...
Read More