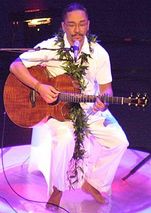 Description:
The Grammy Award for Best Hawaiian Music Album was an honor presented to recording artists from 2005 to 2011 for quality Hawaiian music albums. The Grammy Awards, an annual ceremony that was established in 1958 and originally called the Gramophone Awards, are presented by the National Academy of Recording Arts and Sciences of the United States to "honor artistic achievement, technical proficiency and overall excellence in the recording industry, without regard to album sales or chart position".