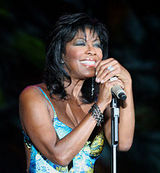 Description:
The Grammy Award for Best Traditional Pop Vocal Album is an award presented to recording artists at the Grammy Awards, a ceremony that was established in 1958 and originally called the Gramophone Awards. Honors in several categories are presented at the ceremony annually by the National Academy of Recording Arts and Sciences of the United States to "honor artistic achievement, technical proficiency and overall excellence in the recording industry, without regard to album sales or chart position".

The 1992 award was presented to Natalie Cole for the "spliced-together" duet of her and her father, Nat King Cole, performing his original recording of "Unforgettable".<ref...
Read More