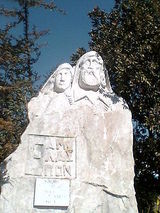 After Nazi Germany attacked the Soviet Union with the initiation of Operation Barbarossa (June 22, 1941 — with most of Greece having fallen under Axis occupation since April and the Battle of Crete having ended on June 1 — the Greek Communist Party (KKE) was the first communist party to call for national resistance (documented in two letters by Nikolaos Zachariadis and Central Committee decisions) in 1940. The duty was heavier from the moment that Hitler invaded the USSR. The KKE together with minor parties of the Left formed a political structure called the National Liberation Front. They were joined by other, center-left or non-politicised Greek resistance militants.

ELAS initiated actions against the German and Italian forces of occupation in Greece on 7 June 1942. Aris Velouchiotis with a small group of 10–15 guerrillas entered the village of Domnista in Evrytania and proclaimed in front of the surprised villagers that they had set off to "start the war against the forces of Axis and their local collaborators". Velouchiotis at first was addressing the traditional...
Read More