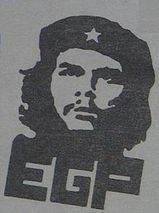 Guerrilla Army Of The Poor

Guerrilla Army of the Poor

Description:
The Guerrilla Army Of The Poor (EGP - Ejército Guerrillero de los Pobres) was Guatemalan guerrilla movement, one of the four organizations comprising the Guatemalan National Revolutionary Unity (URNG - Unidad Revolucionaria Nacional Guatemalteca) that negotiated and signed the Peace accords in Guatemala with the Government and the Army of Guatemala.

Initially, the guerrilla organization went by the acronym NORC but soon became known as the EGP. On January 19, 1972, the first guerrilla contingents entered the forests of the Ixcán, to the north of Quichė. As a communist organization, it combined a vanguard party structure with paramilitary forces and a Marxist-Leninist ideology.

The EGP sought to organize and, to a certain extent, control elements of the Indigenous towns of Guatemala as an opposition to the dictatorial regimes of the late twentieth century.

Until the peace accords were signed on December 29th 1996, the EGP was the guerrilla organization with the greatest number of militants and territorial extension, although this level of influence was greatly diminished from earlier levels, particularly following the brutal 'pacification' of the countryside under General Efrain Rios Montt. At its peak, the EGP could rely upon a social base of approximately 250,000 people, divided in the following guerrilla fronts: