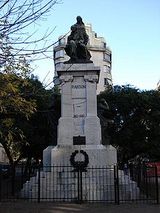 Description:
Dr. Guillermo Rawson (24 June 1821 - 20 January 1890) was a medical doctor and politician in nineteenth-century Argentina. As Interior Minister in 1862 he met Captain Love Jones-Parry and Lewis Jones who were on their way to Patagonia to investigate whether it was suitable for the creation of a Welsh settlement there. Rawson came to an agreement with them, and this resulted in the creation of a colony in the Chubut Valley in the following years. The city of Rawson, the capital of the province of Chubut was named after him.

His parents were Dr. Aman Rawson, a doctor who had emigrated from the United States to Argentina, and María Jacinta Rojo, a daughter of a wealthy family in San Juan, where Guillermo was born. After a Jesuit education in San Juan, Rawson graduated from the Medical Faculty of University of Buenos Aires in 1844. Rawson became interested in politics and democracy. In 1853 he was jailed for opposing Nazario Benavidez, the caudillo or de facto governor of San Juan. The following year he was a member of the Paraná Congress, and from 1862 he was Interior Minister in the government of Bartolomé Mitre.

Apart from politics, Rawson was interested in medicine and hygiene. In 1876 he attended the Centennial Exposition in Philadelphia to present his work on public health in Buenos Aires, the most developed body of work on the subject at the time.

Rawson spent a year in Paris in 1881 for medical treatment, before returning to Argentina. He returned to France for further...
Read More