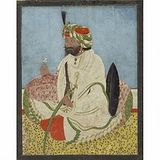 Gulab Singh Of Jammu And Kashmir

Gulab Singh of Jammu and Kashmir

Description:
<!-- Deleted image removed: -->Gulab Singh (Dogri: गुलाब सिंह) (1792–1857) was the founder and first Maharaja of the princely state of Jammu and Kashmir, the second largest princely state in British India. After the defeat of the Sikhs in the First Anglo-Sikh War, Gulab Singh, who served as Prime Minister of the Sikhs “suddenly perplexed the Governor-General by asking what he was to get for all he had done to bring about a speedy peace, and to render the army (Sikh) an easy prey”. As a result, the British transferred all the lands in Kashmir that were ceded to them by the Sikhs by the Treaty of Lahore to Gulab Singh for Rs. 7,500,000.

Gulab Singh was born on 18 October 1792, a scion of the Jamwal clan of Rajputs. His father, Kishore Singh, was a distant kinsman of Jit Singh, the Raja of Jammu. Gulab Singh grew up in the care of his grand father, Zorawar Singh, from whom he learned the arts of horse riding and warfare. In 1808, when the Sikh army of Maharaja Ranjit Singh invaded Jammu, the 16-year-old Gulab Singh fought alongside his clansmen in the unsuccessful defense of Jammu. Following this defeat, the Raja of Jammu had internal autonomy of the principality, which became a......
Read More