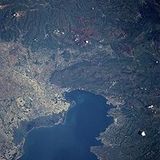 The gulf is limited by an imaginary line connecting the Punta Tagliamento on the Italian and Savudrija (Punta Salvore) on the Croatian coast. Its area is approximately 550&nbsp;km², its average depth 16 m, and its maximum depth 37 m. With the exception of flat islets blocking the entrance to Laguna di Grado, there are no islands in the gulf. Its eastern coasts, with Trieste and the Slovenian Littoral, have more rugged relief.

The sea current in the gulf flows counterclockwise. Its average speed is 0.8 knots. Tides in the gulf are among the largest in the Adriatic Sea, but nevertheless do not usually exceed . The average salinity is 37-38‰, but in the summer it falls under 35‰.

Its most prominent features are:

The entire Slovenian coastline is located on the Gulf of Trieste. Its length is 46.6&nbsp;km. Towns along the coastline include (from east to...
Read More