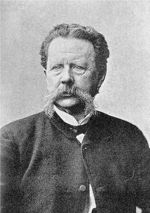 Wennerberg was the son of the vicar of the town of Lidköping in Västergötland, went to gymnasium in the cathedral town of Skara, and matriculated as a student at Uppsala University in 1837, where he studied natural sciences, Classical philology, Philosophy and Aesthetics. He received his filosofie magister degree in 1845 and became a docent of Aesthetics in 1846.

Wennerberg was remarkable in several ways, handsome in face and tall in figure, with a finely trained singing voice, and brilliant in wit and conversation. From the outset of his career he was accepted in the inner circle of men of light and leading for which the university was at that time famous. In 1843 he became a member of the secret society and musical club who called themselves The Juvenals, and for their meetings were written the trios and duets, music and words, which Wennerberg began to publish in 1846. In the following year appeared the earliest numbers of Gluntarne (or "The Boys"), thirty duets for baritone and bass, which continued to be issued from 1847 to 1850. The success of these remarkable productions, masterpieces in two arts, was overwhelming: they presented an epitome of all that was most unusual and most attractive in the curious university life...
Read More