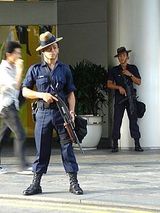 Description:
The Gurkha Contingent (Abbreviation: GC; ; , ) is a line department of the Singapore Police Force. Members of the GC are trained to be highly-skilled and are selected for their display of strong discipline and dedication in their tasks. The principal role of the contingent is to be a special guard force, and it is currently used as a counter-terrorist force.

Just a year after their formation, their presence became an asset when racial riots between the Malay and European communities broke out over the disputed custody of Maria Hertogh. The GC troopers were again activated when major rioting erupted all over the country between the ethnic Malays and Chinese on Prophet Mohammed's birthday from 21 July 1964 till September that same year.

Their presence as a neutral force was important because local police officers were often perceived to be (or were even expected to be) biased towards their own ethnic groups when handling racial disturbances, further fueling discontent and violence....
Read More