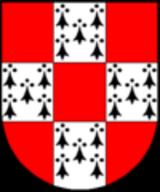 Description:
Guy I de la Roche (1205–1263) was the Duke of Athens (from 1225), the nephew and successor of the first duke Otto. After the conquest of Thebes, Otto gave half the city in lordship to Guy.

After Otto's departure for Burgundy, Guy inherited the whole of Thebes as well as the lordship of Argos, both of which owed homage to the Principality of Achaea. Athens itself was independent of any other sovereign than the Latin Emperor after the fall of the Kingdom of Thessalonica in 1224. The duchy was prospering at the time, however, due to its silk industry (centred at Thebes) and its trade with Venice and Genoa. In 1240, Guy gave out half of the lordship of Thebes to Bela of St. Omer, the husband of his sister Bonne.

When William II of Achaea disputed the suzerainty over the island of Euboea with the Venetians and the local triarchs, Guy supported the latter. In the spring of 1258, William marched on Thebes and defeated Guy in a hard-fought battle at the foot of Mount Karydi. He was subsequently besieged in Thebes and forced to surrender. He did homage at Nikli, but the barons of the realm, not being his peers, sent him for judgment to France. He left in the spring of 1259. The court of France found him not liable for liege homage and thus unable to be deprived of his fief. His journey was to be his punishment. The Chronicle of Morea asserts that Athens, which was technically only a lordship, was officially raised to the status of a duchy only after Guy met with Louis IX of France...
Read More