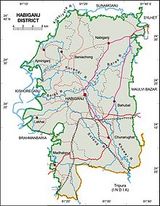 Description:
Habiganj (হবিগঞ্জ Hobigônj) is a district in the north-eastern part of Bangladesh. It is under Sylhet Division.

Habiganj is the historical place where the Mukti Bahini started their first guerrilla movement against aggressor Pakistani Army. It is also the place full of memory of Syed Nasir Uddin(R), an associate of Hazrath Shah Jalal (R) the great saint of Bengal. Historically, Habibganj was a bazaar or ganj beside the river Khowai established by Syed Habib Ullah, the son of Syed Hadaiet Ullah. With the passage of time, Habibganj turned into Habiganj. During the British Raj, Habiganj was established as a Thana (police precinct) in 1790, under Dhaka district (1779–1793). Until 1896, Habiganj's administrative center was in Court Andar, Laskarpur. On 12 September 1874 it came under Sylhet district (part of Assam). Habiganj was declared as subdivision in 1867. On 7 April 1893, according to the Notification no. 273 of Assam Provincial Government, Habiganj Thana (Administrative unit) was established. Habiganj was rejoined with East-Bengal (now Bangladesh) in 1911. Then the Office of the Circle Officer (Development) was established in 1960. Finally on 1 March 1984 Habiganj was established as a District.