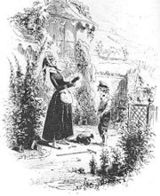 Of Huguenot ancestry, Hablot Knight Browne was born in England, in Lambeth (near London) on Kennington Lane. He was the fourteenth of Catherine and William Loder Browne's fifteen children. According to Valerie Browne Lester, Phiz was in fact the illegitimate son of his eldest sister Kate and Captain Nicholas Hablot of Napoleon's Imperial Guard. There is some uncertainty regarding the exact date of birth. 12 July 1815 is the date given by Valerie Browne Lester, his great-great-granddaughter, and John Buchanan-Brown in his book Phiz!: illustrator of Dickens' world. Other possible dates are 11 June 1815 (Encyclopædia Britannica Eleventh Edition) and 15 June 1815 (Dictionary of National Biography).

When he was 7 years old, his father William Browne abandoned his family, changed his name to Breton and sailed with embezzled funds to Philadelphia where he became known for his watercolour paintings. William Browne was then declared dead by his wife Catherine. Thomas Moxon, husband of William's sister Ann Loder Browne, helped to support the family, who were left badly off.

Browne was apprenticed to Finden, an engraver, in whose studio he obtained his only artistic education. However, he was unsuited for engraving, and having during 1833...
Read More