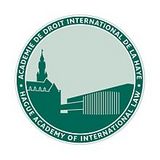 Since its creation in 1923, The Hague Academy of International Law has occupied premises at the Peace Palace, alongside the highest judicial institutions such as the International Court of Justice and the Bureau of the Permanent Court of Arbitration. In the context of the movement for the establishment of peace through law, the idea of creating an Academy of International Law was mooted at the Hague Conference in 1907 (having previously been voiced by the Institut de droit international as early as 1873). The Dutch Government took up the idea, and the International Law Association in turn examined the question. The Dutch Lawyer Tobias M. C. Asser proposed a plan that envisaged more or less what the Academy was to become, with courses held from July to October. Asser received the Nobel Peace Prize in 1911 and contributed a part of the prize money to the Academy; and the Carnegie Endowment for Peace provided a valuable contribution to get it started. The inauguration of the Academy was planned for October 1914. But World War I broke out, and preparations could not be resumed until 1921. When the Summer Courses started on 14 July 1923, at the Peace Palace in The Hague, 353...
Read More