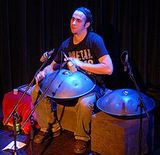 Description:
A Hang (pronounced , with vowel sound between those of the words hot and hungry) is a musical instrument in the idiophone class created by PANArt in Switzerland. The Hang is made from two deep drawn nitrided steel sheets that are attached together creating the recognizable 'UFO shape'. There is nothing inside the Hang but air. The top ("Ding") side has a center 'note' hammered into it with seven or eight 'tone fields' hammered around it. The bottom ("Gu") is a simpler surface that has a rolled hole in the center with a tuned note that can be created when the rim is struck. The Hang uses some of the same physical principles as a steelpan but with a nitrided surface and structural change of having two clamped shells with a small opening so that the instrument is a Helmholtz resonator. The creation of the Hang was the result of many years of research on the steelpan as well as the study of a diverse collection of instruments from around the world such as gongs, gamelan, ghatam, drums and bell. Metallurgical and acoustic research by the makers has led to significant changes and refinement in structure, design, and process over the years since the first Hang was offered.

The Hang is sometimes referred to as a hang drum. The 'drum' label, however, is discouraged by...
Read More