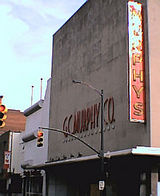 Description:
Harold Ellsworth Crosby (January 22, 1899 &ndash; January 12, 1958) was an American architect who supervised the construction of many G. C. Murphy Co. discount department stores across the United States. Born in Maryville, Missouri, he graduated from Iowa State College with a B.A., 1922. After marrying his wife, Lydia Ferber in 1924, he traveled in North America, South America, and Europe. Crosby joined G. C. Murphy Co. in the late 1920s and became corporate architect. He served in both World War I and World War II as lieutenant colonel under Eisenhower. After returning home, he became vice-president of the construction division of G. C. Murphy from 1947-55 and then became vice-president, Mack Realty Company. He was also a member of the AIA Pittsburgh. He also was the architect for the YMCA Camp, named after T. Frank Soles.

His Art Deco style store in downtown Richmond, Virginia, was demolished in 2004.