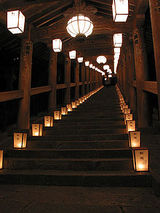 Description:
thumb|240px|The Main Hall is the main temple of the Buzan sect of Shingon Buddhism. The temple is located in Sakurai, Nara, Japan.

According to the description on , the temple was first built in 686 and dedicated to Emperor Temmu, who was suffering from a disease. Later in the year 727, the temple was further expanded by order of Emperor Shōmuand the statue of the eleven-faced Kannon was placed near the original temple that enshrined the bronze plaque.

The temple was favored by aristocrats such as the author of the Kagerō Nikki and the author of the Sarashina Nikki during the Heian period. The temple has been burnt down as many as ten times since the 10th century. Hase-dera was consisantly popular with visitors,helped by the fact it was situated on the route to Ise Shrine.

Hase-dera has flourished as one of the centers of Shingon Buddhism, particularly after the arrival of priest Sen'yo from Negoro-ji in 1588.

The best times of year to visit this temple are in spring, because at this time of year the peonies that line the 200m walkway from the gate to the hall are in bloom. There is approximately 7,00 Chinese peonies planted here and they are a popular attraction. Autumn is the other time of year...
Read More