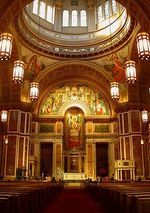 Description:
The New York-based architectural firm of Heins & LaFarge<!--styling Heins & LaFarge is correct-->, composed of Philadelphia-born architect George Lewis Heins (1860&ndash;1907) and Christopher Grant LaFarge (1862&ndash;1938) - the eldest son of the artist John LaFarge, famous especially for his stained glass panels - were responsible most notably for the original Romanesque-Byzantine east end and crossing of the Cathedral of St. John the Divine, New York, and for the original Astor Court buildings of the Bronx Zoo, which formed a complete ensemble reflecting the esthetic of the City Beautiful movement. Heins & Lafarge provided the architecture and details for the Interborough Rapid Transit, the first subway system of New York.

The two young men met at Massachusetts Institute of Technology and trained together in the Boston offices of Henry Hobson Richardson. In 1886, they opened their office. Heins was the man on the site; LaFarge was the principal designer.

In 1888, a design competition for the Cathedral of St. John the Divine, the most prominent project of its kind in the US, was entered by 68 architectural firms, and won in 1891 by Heins & LaFarge, with an eclectic design, based on Romanesque forms but with many Byzantine and Gothic elements, dominated by a massive spired tower over the crossing The cornerstone was laid December 27, 1892, but unexpectedly, massive excavation was required before bedrock...
Read More